The Munich chapter of the Max Planck Alumni Association (MPAA) aims to create a vibrant community of Munich-based alumns*. Members of the MPAA Munich include alumns of the 10 Max Planck Institutes from the Munich area, alumns from other Institutes now living in Munich, as well as active employees of Munich Institutes**.

MPAA Munich aims to connect fellow alumns to each other, as well as to the active members of the 10 Institutes in Munich. Currently, MPAA Munich is working on initiatives focusing on community growth, entrepreneurship and career development, including helping young scientist in their transition from academia to industry.

* To include all genders and facilitate transparent communication, alumni and alumnae are referred to as alumns.

** As an active member of one of the 10 Institutes in Munich, you are entitled to become a MPAA Munich member after 6 months of employment.

MPAA is currently developing a global strategy to foster entrepreneurship among Max Planck alumns. Within this scope MPAA Munich founded a Think Tank that investigates the needs of life science entrepreneurs, to subsequently develop customized strategies for this segment of entrepreneurs within the MPAA.

The first event of the Think Tank brought together young entrepreneurs currently developing promising start-ups in the field of life sciences, such as DEOXY Technologies, PreOmics, and ProDetekt. This discussion was also seasoned by the perspective of a venture capital company specialized in life sciences, Forbion Capital Partners. The first Think Tank focused on the very early stages of an endeavour, including idea evaluation, team building, and prototype validation. The event was very fruitful. It generated concrete ideas for mobilizing resources, know-how and expertise of Max Planck alumns, to address the particular needs of life science entrepreneurs. 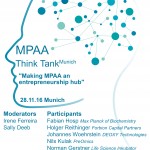 The Think Tank for life science entrepreneurship is preparing a series of events dedicated to further explore strategies for tapping into the entrepreneurial energy of the Max Planck alumns.

MPAA Munich partnered with InPharma platform to help young life scientists of the MPI of Biochemistry, Neurobiology and Psychiatry, as well as from the Ludwig-Maximilian University (LMU) to develop their career path. InPharma has been founded in 2015 in the Max Planck of Biochemistry by at the time PhD students, and now alumns.

The MPAA envisions running a mentoring program in which alumns can share their experience and expertise with active members from all the 83 Max Planck Institutes. Currently, the pilot for this program runs in Munich in partnership with InPharma platform and with the German Society for Pharmaceutical Medicine (DGPharMed).

InPharma annual conference is another perfect event to establish a dialog between  alumns and the active life science researchers of the MPI of Biochemistry, Neurobiology, and Psychiatry.

Filippo Guarnieri, the chairman of the MPAA, held a talk at InPharma 2016, in which he explained how the MPAA plans to harness the alumn community. 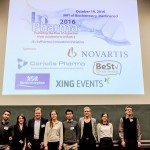 MPAA Munich helps in the selection and recruitment of speakers for this conference.

3Is is a spin-off of the platform InPharma. The 3Is has the particular aim to introduce the Munich Biotech landscape to young scientists of the MPI of Biochemistry, Neurobiology, and Psychiatry as well as of the Ludwig-Maximilian University (LMU).

The 3Is brings PhD students and Postdocs to Biotech companies to talk directly with founders about their journey as entrepreneurs. MPAA Munich helps in the selection and recruitment of entrepreneurs for this project.